The Evelyn Cameron Heritage, Inc. is a non-profit organization located in Terry, Montana. The organization, formed by persons who are deeply committed to the preservation and responsible stewardship of Evelyn Cameron’s astounding photographs, is very proud of achieving a 501(c) Non-Profit status with the US Internal Revenue Service. Having achieved this status, our many supporters are legally able to deduct any contributions, including the purchase of Copies of Evelyn Cameron’s photographs, on their taxes. It is the hope of the Board of Directors, and all of those who so generously volunteer their time and talents to the Evelyn Cameron Heritage, Inc., that the availability of this tax deduction inspires even greater support for this unique and worthwhile organization.

The Evelyn Cameron Heritage, Inc. Board of Directors

About the Rialto Theater 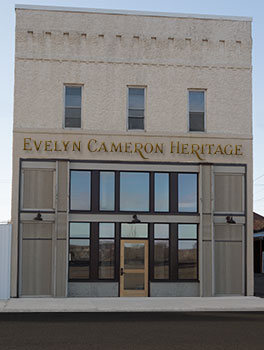 May 1915 Excavation of the basement began in his plans were to have a bowling alley, and pool hall in the basement, according to a news story in the Terry Tribune. The main floor would be the movie theatre and the 2nd floor would be used for rooms and offices. The plans called for a 2 story brick building.

I seems that Mr. Khan was a wheeler-dealer as he had leased the ground floor of the building to Stanly Guy and William Grandfield who would run the movie theatre. He also leased the 2nd floor to Mrs. Jack McMillan as a rooming house. Later he would buy the fixtures and furnishing from Mrs. McMillan and take over the business.

1916 A town plat map of Terry dated June 1916 show that the movie theatre, billiards, bowling would be located on the ground floor, and lunch in the basement! Also around this time the contract was let for stuccoing the exterior of the building. The June 2, 1916 Tribune reads “this will greatly improve the appearance of the building.”

July 1916 A 14’ x 16’ kitchen is built on the back of the building. This increased the seating area in the restaurant, which was housed in the large, clean basement under Mr. Khan Block. “This is necessarily the coolest place in town to eat!” meals were 25¢ cents every day.

Movies were shown every night and matinees were shown during the week. Traveling vaudeville acts would also be booked, when they were available. However, the movie would still be shown later – after the traveling show was done.

Terry was in a growth spurt in 1916, which had the community and surrounding area feeling that Terry would be the place to purchase supplies. The Tribune stated: TERRY WAS A TOWN WITH A FUTURE.

Later, Mr. Kahn opened a first class restaurant in the back of the movie theatre. The kitchen and dining were on the same level, which opened up the basement for billiards!

The Terry Theatre brought many shows to the hall. Some were as many as 36 reels in total, so they would be shown two-at-a-time on a Tuesday night – until all the reels were seen. Showing on December 5, 1916 was “the political Boss.” This was a New Peace-Preparedness Drama. Performing the same night would be High Class Vaudeville and there was music between acts. There was also listed on the ad: FREE BAND CONCERT TWICE DAILY.

A story in the Tribune stated that the Khan block was a prominent place on the main street of Terry. This is a building the town can be proud of.

1917 The Virginian was playing at the theatre. Movies and shows continued. Mothers around the area were pleased with the content.

1918 A story in the Tribune reads that the theatre will open again, after being closed for 6 weeks on account of the influenza. It will reopen Sunday evening, the ban having been lifted by the Board of Health. The closing of the theatre has deprived the people of Terry of any amusement features for some time.

1918: Terry Tribune: Geo Khan buys first Liberty Bond doing so without solicitation upon the part of any person. Not only did he apply for the bond, but he deposited the money to pay for it when it is issued on the 15th.

June 1918 Flag Day at Movie tonight. Program will be by Thomas M. Murn. People of the county are asked to make the occasion one of true patriotism.

Oct. 3, 1919 Pool and billiard hall in basement of Khan building was sold to Albert Sprague, a homesteader from the Mildred community. He is having it remodeled and will constantly keep on hand, in addition to cigars, a full line of candy and soft drinks.

The Rialto Theatre seated 284 and was still listed as an open, active theater in the late 1950’s.

Nobody knows the exact date the Rialto completely quit showing movies. However, whenever that was, it did go the way of old, structurally sound buildings – it was used for storage of, well, just about everything imaginable. When the Heritage organization formed, the Board of Directors knew that a building would be required in order to make viewing some of Evelyn Cameron’s photographs available to the public. Also, a secure location would be required for storing the original photographs, diaries, notes, plates and more. The Board also believed that it would benefit posterity if they renovated and refitted the historic Rialto Theater for these purposes, rather than constructing a new facility. Hence, the lengthy and costly process of saving a piece of Terry history began.

Today, the Rialto Theater is the official home of the Evelyn Cameron Heritage, Inc. The work on this piece of regional history is ongoing, and likely will be for some time to come, but it has been made more than adequate for hosting certain events and housing much of Evelyn Cameron’s collection. You are invited to visit, look around and let your imagination take you back to simpler times – times when a uniformed usher tore your tickets and another escorted you into the theater to find those ‘just right’ seats for watching the feature film.