Some stories are simply too big, and too delicious, to be served in anything other than a book – a respectably sized book, at that. The story of Evelyn Cameron falls squarely into that category. It’s a story that spans two continents that are separated by a treacherous ocean. A story that sees the incredible Evelyn Cameron thrive in two vastly different social strata. A story of surrendered privilege and of hardships known only to those women brave enough, sturdy enough to live on the Montana frontier of the late 1800’s and early 1900’s. The story tells of an amazing woman who befriended wild animals such as coyotes, antelope and wolves. Finally, it’s the story of the birth and evolution of a great American artist – born in the most unlikely place imaginable. However, this is not a book, so I will, out of necessity, be brief.

Evelyn Cameron was born in England in 1868 to a family of wealth and position. Hers was to be a life of privilege, a life of opportunity, a life of servants and feather beds, a life devoid of that era’s myriad daily hardships. But Evelyn’s spirit was that of a great adventurer and fearless explorer – not that of a prim English debutant. And while her roots would always have some effect on her life, it was her curious and indomitable spirit that would be the earmarks of her path and her rich legacy.

The spectacular photographs of Evelyn Cameron, which have only just recently started to receive their due attention and praise, are most certainly the keystone of Evelyn’s lavish legacy. Her photographs capture all of the elements of the life of a frontier homesteader in some of the hardest country in America including the geography, the animals and the people of the time. Evelyn Cameron’s photographs are truly art. They are captivating, expressive and technically perfect. Considering that photography was still in its infancy, and that she lived in one of the least accessible places in the United States, Evelyn’s vintage photographs of the old west take on an even greater attraction and fascination.

At the end of this brief article there is a link to another page of our Evelyn Cameron Website. On that page you’ll find links to books and articles written about Evelyn Cameron. In the brief balance of this page, I’d like to quickly touch on some factors that make Evelyn’s photographs even more astounding and impressive.

When Evelyn Cameron came to the United States, she had to cross the fickle Atlantic Ocean by wooden sailing ship. At that time, ocean travel was a highly treacherous undertaking that was extremely demanding on both passengers and crews. These dangerous trips took weeks and routinely included serious illness, injury, fatalities and, of course, the occasional loss of the entire ship and everyone aboard. Even if the voyage went perfectly, passengers and crew were always physically weakened by the ordeal. Taking such a trip today would be out of the question.

When Evelyn Cameron arrived on the east coast of America, depleted from her taxing ocean voyage, she still had to travel to eastern Montana. This arduous 1,800 mile journey required crossing against powerful river currents, negotiating steep inclines and valleys and traversing vast stretches of utterly barren territories – devoid of fresh water or the most basic supplies. Medical attention was non-existent. Temperatures would reach well over 100°F in the summer, and sink far below 0°F in winter. Again, the traveling took weeks, and physically drained all of those bold enough to embark on such an adventure. And when Evelyn and Ewen, her husband, arrived at what was to be their new home in Montana, there was no respite. (NB: Evelyn Cameron’s husband, Ewen, was English and something of an ornithologist – and by accounts, a ne’er do well and rascal.)

Shortly after creating a home in Montana, Evelyn began to document the life of a prairie homesteader in her detailed diaries. Her beautifully penned (and penciled) diaries are often called the Evelyn Cameron Journals. Later, Evelyn’s writings would be augmented, and eventually even overshadowed, by her photographs taken in the old west. Evelyn Cameron took crystal clear, large format photographs of friends, neighbors, cowboys, sheepherders, horses, family get-togethers, weddings, river ferries, freight wagons, Skinners, trappers, people working at tasks of the times, brandings, the uniquely picturesque terrain and geology of the eastern Montana badlands, birds of prey including eagles, coyotes, wolves and many family pets. Her collection of vintage photographs of the old west, and the people, animals and landscapes of the time, is fast becoming legendary. Interestingly, her photographs and meticulously detailed, historically accurate diaries are more and more frequently referred to as research references.

There are so many more incredible tidbits to offer about Evelyn Cameron’s life and accomplishments, but this reporter has reached the bounds of his assigned container. Still, it would be wrong to signoff without bringing to your attention how horribly difficult it was for a photographer to practice their art in the late 1800’s in eastern Montana. The heavy, bulky camera and required support equipment, the chemistries, the negatives, the photo papers, a darkroom – and more. All of the camera and necessary support equipment required for picture taking had to be securely and carefully packed onto a horse or mule and moved across rugged terrain to locations which were frequently many miles from Evelyn’s home. Everything needed for photography was special ordered and brought by freight wagons from the coast. It was costly, time consuming, and required precise planning as well as a great deal of expertise.

In closing, please show your support for the Evelyn Cameron Heritage by adding some of Evelyn Cameron’s photographs to your personal collection of art and antiques. Her vintage photographs of all things ‘old west’ will enthrall, intrigue, fascinate and entertain you and yours for generations to come. 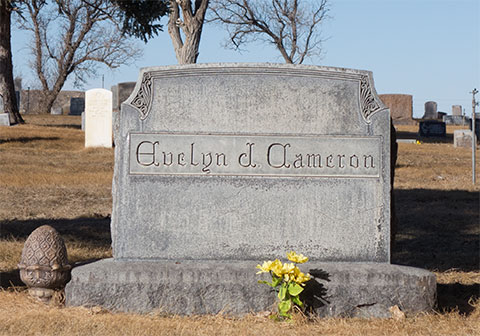